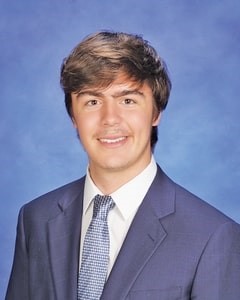 Perez learned about the organization when visiting New York. A friend invited him to a meeting.

“It spoke to me and I knew I had to bring it to Miami,” he says. “This is a place for communication for people to be free and talk about what’s going on in their lives.”

When he came home, he held meetings every four to six weeks at his home for more than a year, and then started a chapter at Gulliver. He’s helped the organization spread to Palmer Trinity School, Ransom Everglades, Westminster Christian School and Carrolton.

Perez says they are talking to students at Palmetto High School about a chapter.

One of the factors that drew Perez to the organization is that those who attend are made to feel at ease, no matter the questions asked.

“You don’t feel you are being scolded,” he says. “Students can come up to us, or can go up to the speaker. If they have a friend, they ask, ‘how do I know my friend is addicted? How do I get them to stop?’”

Perez says the speaker usually tells the person what worked for him and what might help their friend.

Perez says that in typical anti-substance abuse programs the speakers are older, but in Generation SOS the speakers are peers. The format is group meetings with a speaker that talks about their story and then the kids attending can ask questions and have peer to peer conversations.

Generation SOS Miami was started before COVID and the sessions had to go to an online platform for a while.

“During the pandemic we did our large meetings which could be 200 people plus,” he says. “Our speaker would join the meeting and the rest of the people would be muted until the end.”

Perez says the problem with online meetings is that they lack the personal connection to the speaker.

The Gulliver Club meets at school and then the larger Generation SOS group meets outside school.

“For school meetings we have students who could be going through it, but most aren’t, or it could be a family member,” he says. “Our speakers, who are past addicts, they come to us and tell us their stories.”

Perez plans to continue to be involved while in college. Chapters have been started at SMU and Columbia.

At Gulliver, Perez is involved in television production.

“We do morning announcements on Fridays,” he says. “I set up the speaker’s microphones. I go to help them out.”

He’s also been interviewed a couple of times for the announcements.

He’s a member of the chess club and went to a national tournament his freshman year.

“I ranked fourth in the unranked division when I went to the U.S. National Chess Tournament in Tennessee,” he says.

He’s a member of GOALS, an organization that brings together high school students and autistic children so they can play soccer together.

Perez has applied to Wake Forest, SMU, Tulane, University of California at San Diego and Boulder.

His community service includes working with his family’s foundation.

“My family and I go and give back to the community,” he says.

He works on fundraising and making donations. Some of the organizations he’s been involved with include Touching Miami with Love, Breakthrough Miami, the Humane Society and the Perez Museum.

“I wanted people to be helped,” he says.

We are deeply committed to taking the hope, optimism, and peer support of Generation S.O.S. nationwide so that youth everywhere can become a part of our community.

There are three ways to donate:

Send your donation made
payable to:

@GenerationSOS
Generation S.O.S. is the recipient of the GuideStar 2021 Silver Seal of Transparency.

Be a part of our Generation S.O.S. community

Help others by sharing your story.